Wow, it is June and we are finally posting an update. It has been a busy two months since our last post. Our goal was to take Gypsy out for the Memorial Day weekend cruise and we did. We had a working head, toilet and water, and a working stove. We spent three days aboard and it was great.

We wanted to get the galley counter top in which means getting the refrigerator installed.  Last post we had built the flange. We used the flange to make the lid. The lid parts were glued up  clamped to the flange with plastic between so they would not stick. 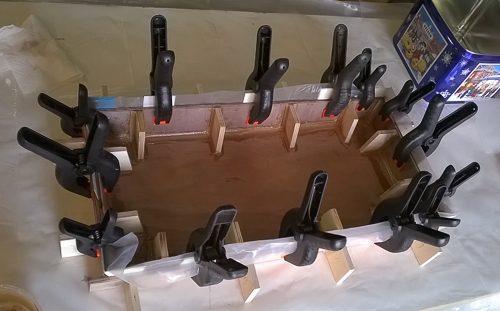 Then we glued the flange to the top of the refrigerator box. 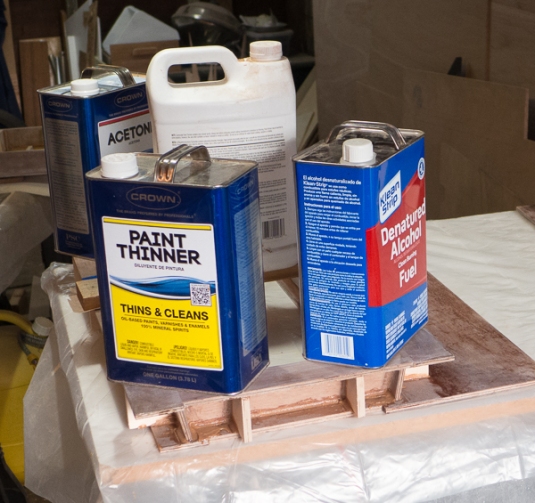 Then we fit the top and flange to the box. 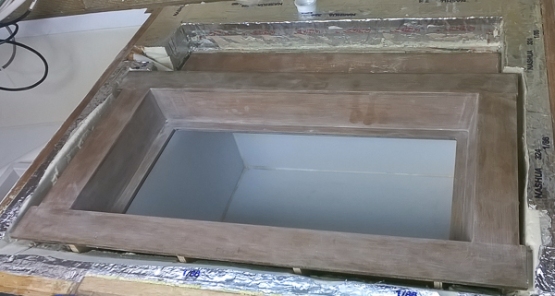 The top of the flange needs to be exactly the same as the underside of the counter top. We also had to figure out how to route the Freon tubes from the evaporator, which is installed in the refrigerator box, back to the compressor.

The tubes need to run through the pantry on the way to the compressor and so we wanted them up as high as possible and in a protective tube so they would not be damaged by the canned goods in the pantry. Carefully angled PVC pipe does the job. It will all get encased in foam when it is installed.

We realized that we would not get this done in time so while we have kept working on the lid and flange, it was not the priority. They got primed last weekend. 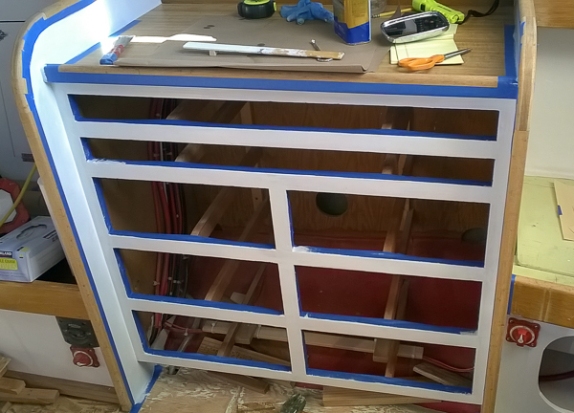 We also did more painting. It has to get done and Gypsy looks so much better in white than lime yellow. Nina worked on varnishing and got the galley drawers done. 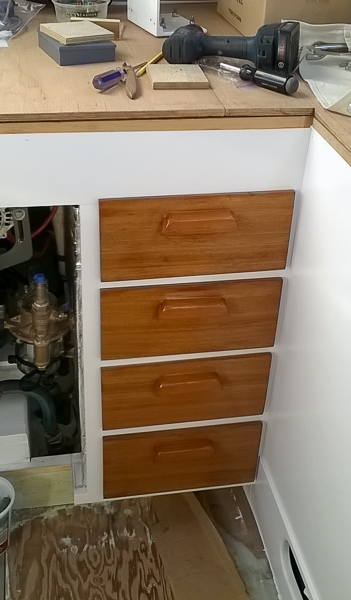 Looks good! They also were helpful for storage on our cruise.

The head needed to get to a working point. Bill had to finish the ducting on our composting toilet. We had decided to build the ducts in for a more finished look. 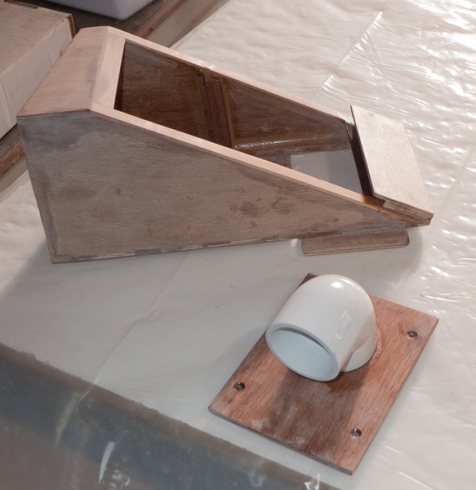 Getting the connecting parts built and painted. 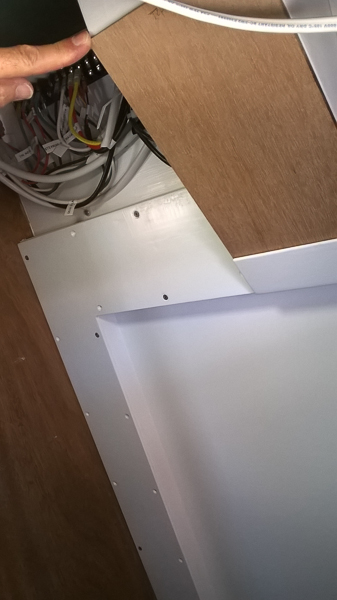 Almost done. One of the great points of our AirHead is that there is no plumbing involved so once the duct was in the toilet install took 30 minutes. The ducting works. 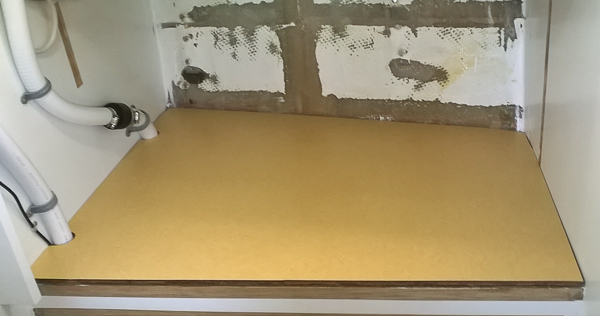 We did need water and it was going to be much easier to install and plumb the head sink than the galley. The counter top got covered in WilsonArt laminate, it is a ocher pattern called something like Tigris parchment. 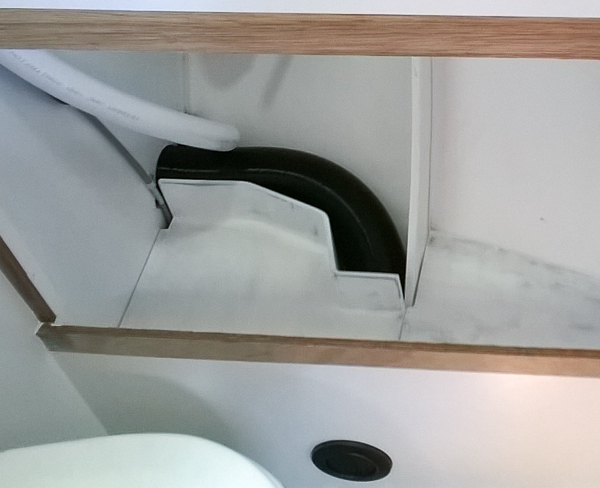 We also made a shelf to fit in the vanity. Note the custom fiddle to protect the heater duct. 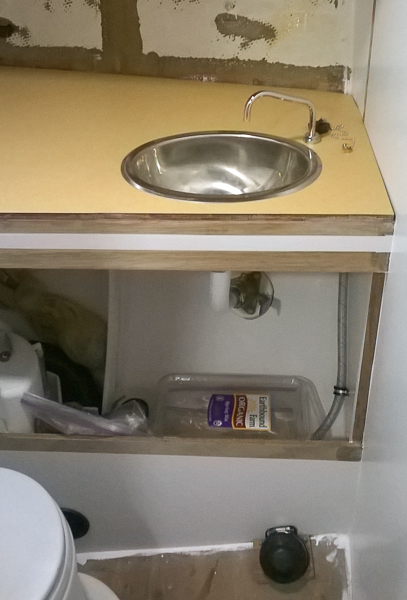 Now for cooking. We needed to install the stove and we also had to install the propane system. This was one of these we will figure out the details latter things. Well it was latter and Bill spend too many hours on it, but we now can cook. 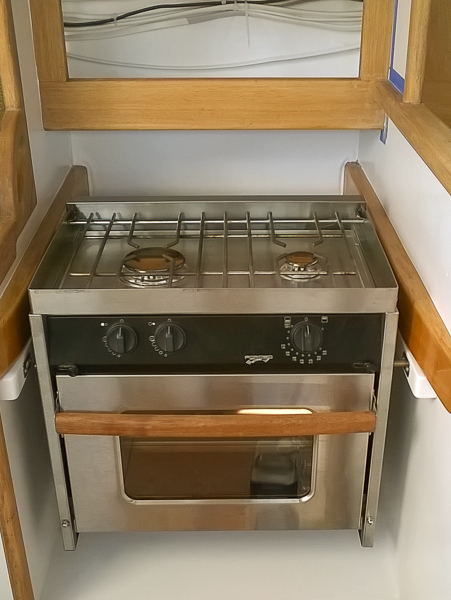 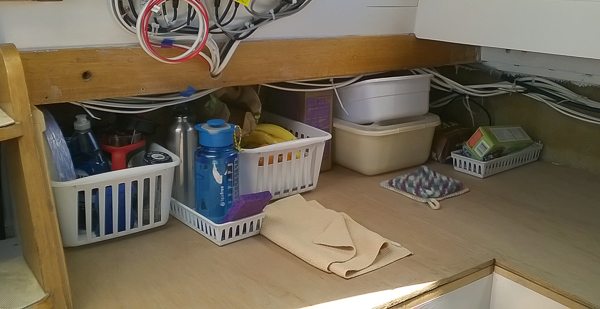 We had the counter top plywood ready so it was slid into place for the weekend.

Nina also has been busy making the new cushions, Needless to say we have been busy evenings which helps to explain the lag in blogging.

The good part of using Gypsy is it really helps us to see how systems are working. It also gave Bill several new projects as we discovered some engine problems. Last weekend Gypsy had the engine aligned and the valves adjusted. Water and fuel leaks also have been dealt with. Fingers crossed and we are more ready for our next outing.

4 thoughts on “Work and Play”