Stuff is getting done! We are at the stage where we can start to check items off the list as being completed. We also have several lists to work off of.  Much is left to be done.  We arrived Sunday morning to find Gypsy unwrapped. The hull was clear of paper and tape and plastic. The hull paint had been buffed and Gypsy looked gorgeous. Greeting us as the door was a list of tasks from Tom.  This list did not include the things that Tom had told us about last week. The list was long. One of the items: “fix the companion way hatch so it slides better.”  The hatch has always stuck a bit, and even reinstalled, it still did bind.   The solution:  remove the sea hood and the hatch and fix it. We decided that that could wait until Monday.  At least the caulk was still fresh – it’s easier to remove than when it’s fully cured.

Bill was overwhelmed by the project lists so he started on the mast. The spinnaker crane for the mast head was painted and he installed that. The only thing left on the mast is to wire the tri-color anchor light at the mast head and put the halyards back on.

While Bill was working on the mast, Nina was installing the lazarette lid. All of our cockpit locker lids are now installed. Next weekend we will paint them and the side decks with non-skid paint.  Now that we know how to tape them off, it should take one day to get that all done.

Now that we were warmed up we were ready to tackle the stanchions, which ironically, were not on Tom’s list for us. They are the metal poles that hold the life lines. They actually went in very easily.

We rounded out the day by installing the new fore hatch, the aft dinghy tie down rings and the last port window.  That was 12 hours of work. 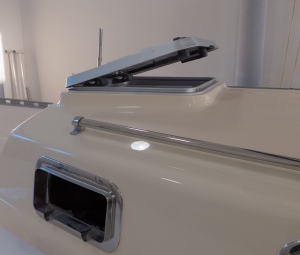 On Monday it was time to work on the companionway hatch. We removed the sea hood, which was glued down really well and the hatch. Bill worked on the hatch and it still would not slide well. We asked Tom to look at it and he figured out where it was binding in no time at all. It now slides very well so we reinstalled it and the sea hood.

Next up was the bow cap. The bow cap not only protects the bow from the anchor, but it is where the forestay for the mast attaches. After lots of caulk and Nina stuck in the anchor locker tightening nuts upside down, it went on nicely.  The windlass went on next and will be used to haul the anchor in. It has an electric motor that was slightly fiddly to install but fit beautifully nonetheless. The wind-lass is very happy since she will no longer have to manually raise the anchor.

We then bolted the fuel tank in place. Now we are ready for the engine. Nina installed four of the rub strakes she had made last weekend, and with help from Bill, screwed in the exhaust fitting for the Espar heater. Bill installed the compass. That was 13.5 hours work. It was a long day and we both were very tired.